It is with great enthusiasm that we announce the upcoming production of Turtle Plays in New York City! 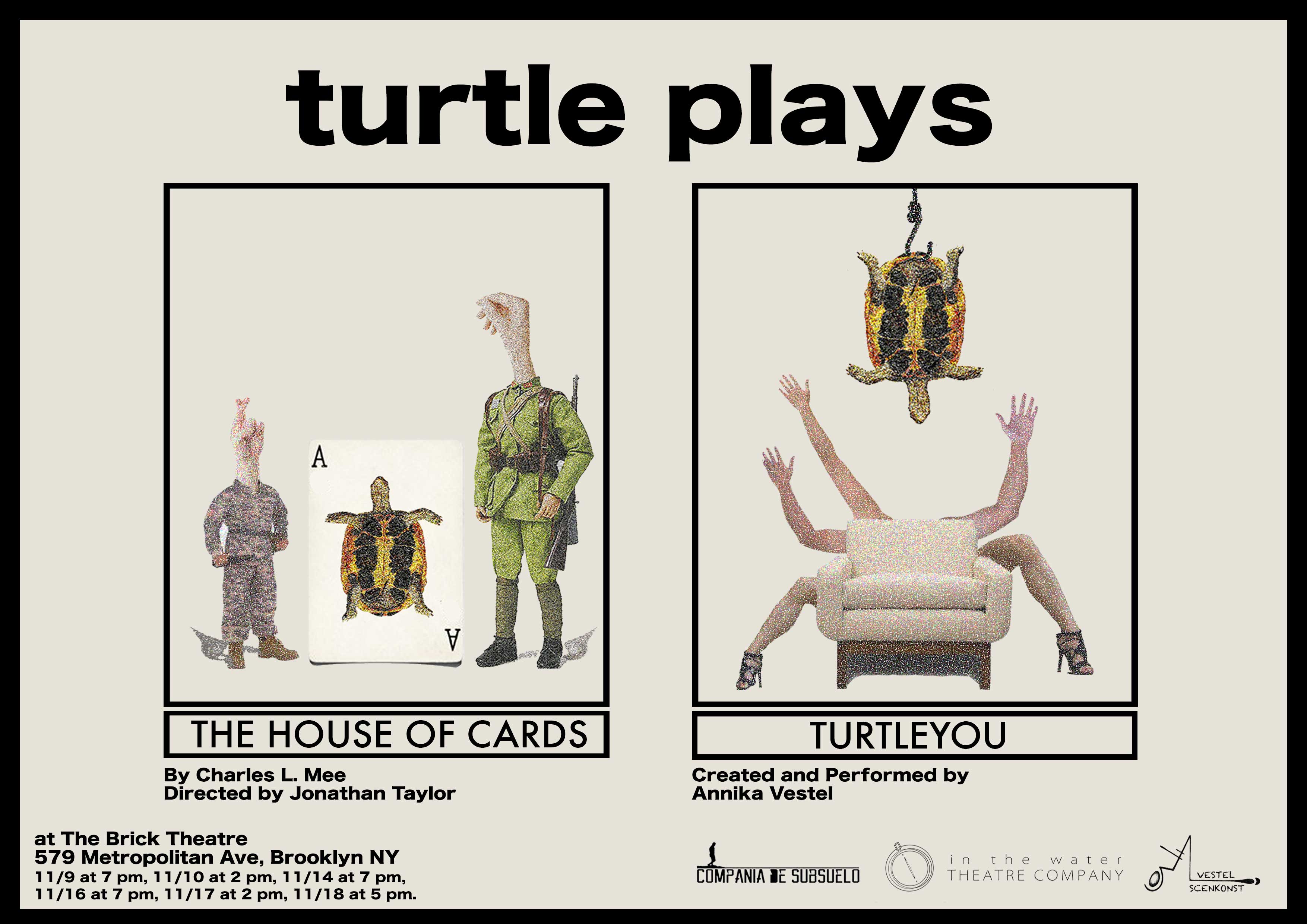 Turtle Plays is Vestel Scenkonst’s production of Turtleyou, created by Annika Vestel, alongside In The Water Theatre and Compania De Subsuelo’s Chilean production of Charles L. Mee’s The House of Cards. This evening of two plays confronts our inherently violent impulses and the effects they have on creatures around us, both two and four-legged*.

Turtle Plays performances are November 9th-18th at The Brick Theatre in Brooklyn. Look out for more details and the link to buy tickets over the coming weeks.

*No turtles were harmed in the making of these plays.

**Indicates that the plays will be performed in their original production languages: Turtleyou in Swedish / The House of Cards in Spanish. No supertitles or translation will be used but a synopsis will be available for both plays in all three languages. Those who do not speak Spanish or Swedish are encouraged to attend! All other performances are entirely in English. All performances will feature the same cast.

Turtleyou is a visual, grotesque and associative solo-performance about meat, in the broad sense of the word. A movement-based staging of the recipe Turtle-soup, real from the old Norwegian cookbook Stor Kogebog (Big Cookbook), Turtleyou uses a mixture of choreography, spoken and recorded text, video projections, and sound. By letting the visual material change between illustrating and contrasting the recipe-text, the meaning of the words open up and different subtexts appear. The recipe becomes a sort of springboard from which the audiences associations can expand, and move into themes such as meat-consumption, power, human/animal dualism, and objectification
Choreography/Directing, video animation, scenography, costume, and performance by Annika Vestel, with sound by Cha Blasco.

At home in his study a recovering veteran tells us, his guests, a series of stories to expose himself and his violence affected world-view. He reflects on nature, love and his history with destruction. His stories become his armor against the unknown, while his world slips deeper into chaos.
As we journey through the play his words transform from being of one person into a voice representing thousands. The play is a celebration of the human ability to persist through hardship and move forward.
Castillo de Cartas is performed by Juan Diego Bonilla (Chile) and Daneila Lewysohn (Chile) and was directed by Jonathan Taylor (United States). The play is written by Charles L Mee Jr. Un Castillo de Cartas is a co-production between In The Water Theatre Company and Cia de Subsuelo originally performed at Teatro de Bolsillo in Santiago de Chile.